NextGrid technology is unique from all other CHP technologies today.

While the majority of CHP systems on the market today will benefit customers by reducing emissions and increasing fuel efficiency, not all combined heat and power systems are created equal.  Many CHP systems boast “high” combined efficiency but few actually deliver. The reason for this is what is known as the Carnot Cycle. Essentially it states that there is a maximum limit on the amount of energy that a heat engine can convert to useable energy. This is why CHP systems that use internal combustion engines and/or combustion gas turbines (both are types of heat engines) have maximum efficiency in the 75-80% range.  While still good this does not come near the efficiency of a NextGrid CHP system at 95%.

NextGrid technology is unique from all other CHP technologies today. A NextGrid CHP system utilizes the revolutionary Green Turbine. This is a micro-steam turbine (about the size of a football) that uses steam to generate heat and electricity. They operate on what is known as the Rankine Cycle. 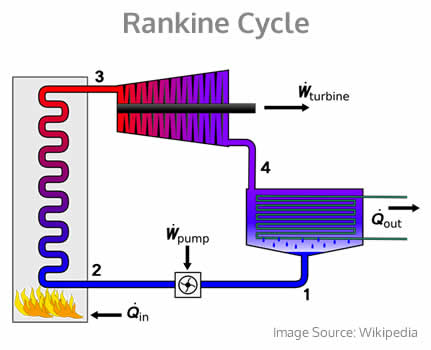 Our steam generators are the most fuel efficient in the world. Up to 95% of all of the fuel used is converted to either heat and/or electricity. This is why our customers can save thousands of dollars a year on their energy bills. Our systems generate small amounts of steam similar to the way an espresso machine does. This means that the steam is never stored but is released into the turbine as soon as it is created. Because the steam is not stored there is never any danger from steam related explosions.

Higher efficiency means lower operating costs for business owners. This also means reduced greenhouse gas emissions (GHG) including NOx and Carbon Dioxide. NextGrid CHP systems have the highest fuel efficiency and lowest carbon emissions of any combined heat and power system on the planet. In fact our NOx emissions are between only 0-3 parts per million!

A NextGrid CHP system is the most affordable and most efficient CHP system on the planet today.

Find out how you can become an Authorized Dealer